Choreographies of the Social

During two weeks in August 2019, and in connection to Stockholms Kulturfestival, the public encountered a diverse range of artworks such as installation, video, performance, sound, experiences, theater and an assembly.

On Choreographies of the Social

Choreographies of the Social explored the changing field of social relations. The project was informed by artistic and activist practices that investigate how we relate to one another and to the world around us. The different works addressed inherent social tensions and the global dynamics of our time.

The project borrows its title from Andrew Hewitt’s book Social Choreography: Ideology as Performance in Dance and Everyday Movement in which Hewitt uses the term “social choreography” to “(…) denote a tradition of thinking about social order that derives its ideal from the aesthetic realm and seeks to instill that order directly at the level of the body.”* The sense in which Hewitt employs the term refers to the arrangement of settings, movements, and actions that result in specific events.

Choreographies of the social thus can be understood in terms of relations, thinking patterns, and ways of organizing that are constantly shifting, forming the grounds for what we call “society” and shaping our interactions and the impact they have on the world.

The 20th century unfolded amidst the unstoppable drive of the capitalist modernistic project. Centering on humanist ideals, it aimed at elevating the status of humans to the center of the universe, much to the detriment and subjugation of all other life-worlds.

The 20th century unfolded amidst the unstoppable drive of the capitalist modernistic project. Centering on humanist ideals, it aimed at elevating the status of humans to the center of the universe, much to the detriment and subjugation of all other life-worlds. Industrial and technological advancements paved the way for “engineering” new social forms and organizations, with the focus increasingly shifting toward preserving the rights and freedoms of the individual. The institutional machinery, including the emerging fields of mass-media and TV, were put at the disposal of engineering the common ground upon which new socio-political projects and relations were supposed to surface and consolidate, while the dark and constant shadow of a nuclear threat gave rise to State programs for social care and defense. It is during these times that most institutional structures that represent relations of power, organization, and control, as well as the terms and vocabulary we use to refer to forms of social organization, were created and inherited from. Sweden, too, led the way in social engineering through its flagship Folkhem project – known otherwise as the welfare system – a waning legacy that today is claimed by all sides of the political spectrum, from the center-left to the new conservatives and the extreme right. Framed by demographic conditions in Sweden at the time, the political concept of Folkhem forged a successful sense of national identity and belonging, conceiving of society as “one large family” where everybody is taken care of, not by the helping hands of others, but rather by the agreed structure of that “family”. Yet, the core of the project was about the interests and rights of the individuals, as well as the set of circumstances that would free them from the need to rely on help from more entrenched social structures, such as family or blood bonds.

One of the key references of social engineering can be found in Karl Popper’s acclaimed book The Open Society and its Enemies (1945,) in which he rejected any holistic view of the world and society as outdated and unsuited. With his blind faith in rationalism and individualism, he rejected any organic association of traditional society which, according to him, would give way to abstract relations in modern society by what he called “piecemeal engineering.” Depicting the ideal, yet impossible set of relations in abstract society, he spoke of a society “in which men practically never meet face to face – in which all business is conducted by individuals in isolation who communicate by typed letters or by telegrams, and which go about in closed motor cars (…).”* Aware, however, of the power of emotions and that “men have social needs,” Popper foresaw new types of relations, such as exchange and collaboration based on shared interests, to replace the older forms of socializing in traditional societies.

After a century of modernistic project and several decades of unfettered neo-liberal rule, culminating in the rise and spread of information and communication technology, the daily reality in most societies is closely approaching Popper’s societal vision, albeit with highly different outcomes: we seem to have entered an era full of contradictions and paradoxes. Speed in communication networks has reached incredible heights connecting people and things alike in an ever-growing global web. Science has come a long way achieving unthinkable results; it envisions making humans immortal and is readying to propel us into outer space. The world is producing wealth never before seen, while living standards and longevity have steadily moved upward.

And yet, the more we use our tech-tools, the more we are removed from our social bonds and locked behind screens, changing the way we socialize or even build relations. Humanity’s achievements and life-style have been made possible at the expense of the very planet we inhabit – destroying it to the extent of a point of no return – while making most other life forms we’re supposed to share it with extinct. Despite the wealth, precarity and the numbers of displaced people are at unprecedented levels globally. And instead of openness, sharing, and mutual exchange, the foundations of our multicultural societies are shattering due to fear, religious fundamentalism, xenophobia and fanaticism dangerously normalizing in both political and public discourse.

While the landscape of social relations continues to fragmentize, new affinities have emerged, resulting in innovative forms of gatherings, assemblies, and social formations. The last decade was particularly marked by the financial crash of 2008 that is still affecting large sections of the global population, while unprecedented levels of migration caused by unbearable violence against life has fundamentally altered the social fabric of our societies. This has gone hand in hand with the rise to prominence of information and communication technologies, as well as the “social media” that have changed the way we are in the world in a profound and radical manner. Consequently, we have witnessed the emergence of popular social movements with transformative power, such as the Arab Spring, Occupy movement, or los Indignados, who all aimed to politically articulate the worsening conditions. Even newer movements have appeared recently, such as the “Yellow Vests” in France. Still unfolding and with yet to be defined outlines, they are mostly composed of masses of disaffected individuals that join together without ideological bonds, based on temporary shared interests and desires. Parallel to these movements we have also witnessed the rising tide of populist leaders and many forms of populism and fanaticism, or “digital populism”, which appeals to “digitally connected but politically disgruntled electorates,”* as Paulo Gerbado put it. In need of constructing a “common enemy” on whom to lay the blame, and following a celebrity-leader who doesn’t fulfill desires but instead uses fiction and propaganda to stir and capitalize on emotions, they most often favor right-wing rhetoric and dichotomies of “us and them.” As a result, entirely new social dynamics have appeared globally, generating quandaries about the meaning of the inherited terms we’ve used to relate and understand society and social movements.

How do we then relate to each other and to the otherness of the world in this shifting reality? How can we engage with the new narratives of the social created from algorithmic automatisation, derived from the amalgamation of social media and populism, and what role does emotion play in a time of outright digitalization? What are today’s choreographies of power, resistance, solidarity, and care? Can we reclaim the imagination about the future to be able to dream of other potential ways of being together in this or in other worlds?

While these developments are still unfolding and we will need time to rearrange the social coordinates, perhaps it might be helpful to try to understand the affects and affinities that underlie these amalgamations and forms of re-assembling – or, in other words, these new choreographies of the social. In the era of algorithms, emotions have become the main force in an affect economy, but they also have an impact on how we choose to align ourselves or pledge alliances. We need to move away from an understanding of affinities and relations as arising exclusively from the interests and desires of masses of disaffected individuals. We need a more holistic understanding of the social and humanity as “the very negotiation that emerges from being a living creature among creatures and in the midst of forms of living that exceed us,”* as Butler commented, hinting at other types of affinities that draw people together. As the invited artists and their interventions would suggest, these affinities and the respective forms in which bodies, individual and collective, appear and reassemble, arise from the shared concern about the ways we participate in the life-world around us; and how through such processes we can transform and equally be transformed by the world.

Goran Sergej, Choreography is a way of thinking about the relationship of aesthetics to politics in Frakcija NO, YEAR.
https://thefuturecrash.files.wordpress.com/2008/07/andrew_hewitt.pdf (datum för hämtning av text)

We change each other

"We change each other" is a monumental light installation by Shilpa Gupta. The work is a thought-provoking creation...

For Choreographies of the Social, artist Klas Eriksson re-enacts “Who are ya?!”, a performance from 2011 focusing on temporality,...

Vilka är ni? is a theatrical performance for all the family. The audience encounters characters from the plant and...

"The Chorus of Begging" comprises people who beg everyday on the street and the Chorus of Giving people...

Interplanetary Species Society (ISS) was a new project by artist Jonas Staal that consisted of a large-scale installation...

Our movements are loud

The Bridge Radio presents a radio-play that is produced collectively by different people, with and without Danish citizenship,...

Kämpaoke was a survey of historical, recent and current civil rights struggles, justice movements and the material traces...

"Emergency Routine" is a new performance by the Isreali Public Movement. Together with five performers, the public is...

Molly Haslund´s "Coordination Models" evolves in the space between installation and performance. The work consists of a series... 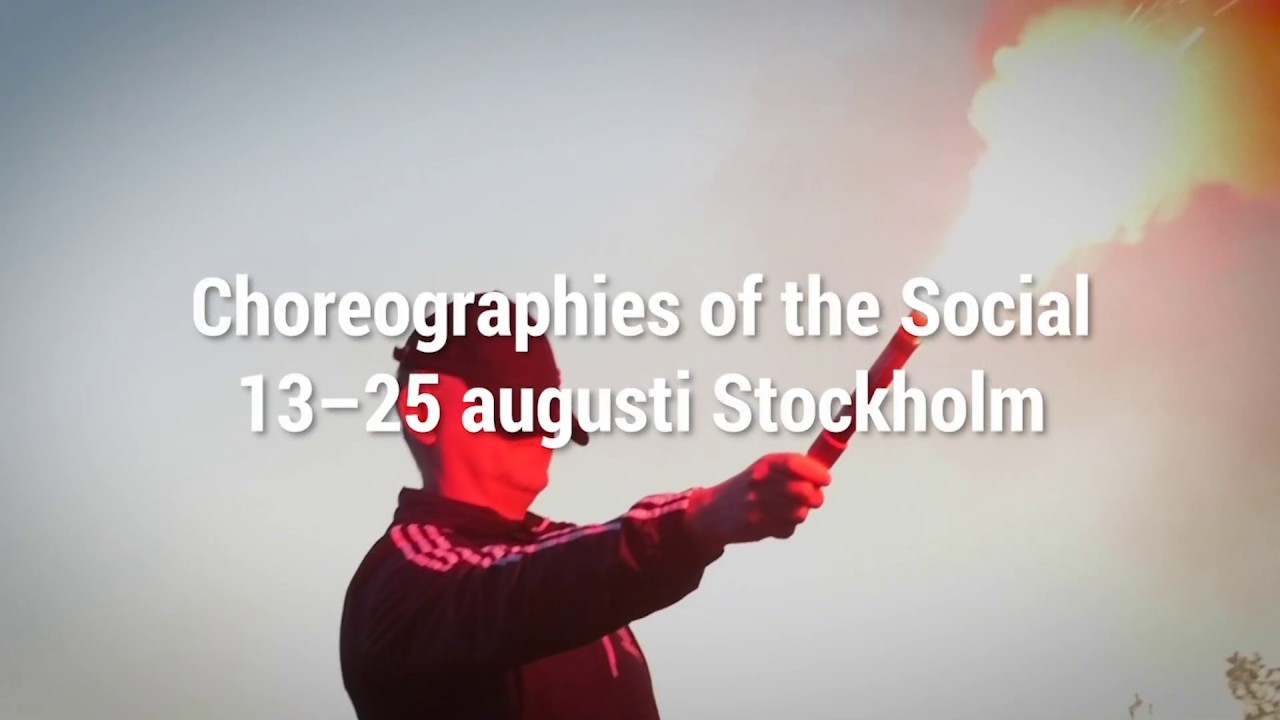 Katharina Grosse won the competition for the artistic design for the infrastructure area of Olskroken with bLINK, a...