Monument to Work (Arbetets Monument) is a memorial performed by people in motion. The monument is a work of art by the Romanian artist Alexandra Pirici. It is based on the movement patterns of factory workers, from the 1970s to today, and focuses on the working body in the transition from industrialism to a post-industrial economy.

About Monument to work
About Alexandra Pirci

Monument to Work was been acquired for the Public Art Agency’s collection and was performed for the first time on five different locations in Stockholm 2015. Since the monument is about work, the various sites in the city and their respective relationships to work will be reflected in the piece; therefore, although the event itself is the same, interpretations may vary between the different locations, Skärholmen, Norrmalmstorg and Kista.

As part of Alexandra Pirici´s working process, she has interviewed industrial workers from different generations about the physical movements they are performing, and have performed, in their working life. The interviews are conducted in collaboration with the worker’s union Verkstadsklubben at the industry SKF in Gothenburg.

The past and present movements of the workers formed the basis for a performative public monument for the first time in 2015 also in central Gothenburg, a city with a long and proud industrial heritage. The monument will be included in the collection of the Public Art Agency Sweden, with the possibility of re-enactment in the future. 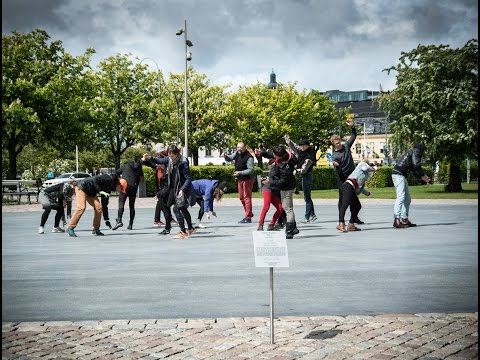 Monument to Work/Arbetets Monument is the first of a series of commissions taking place in different parts of Sweden on the topic of industrial society in a time of change, and is curated by Lisa Rosendahl.

Alexandra Pirci on Monument to Work

“Monument to Work could be seen as a recurring public ritual to commemorate the physical labour that enabled modern society to evolve. It is also positioned in relation to the ongoing shift towards immaterial production: while paying an homage to demanding physical work, the Monument does not attempt to glorify and reproduce it by perfect illustration, neither to replace it with cognitive and affective labour that is just as demanding.

It rather attempts to transform it, prompting us to imagine a future where the increasing automation that gradually makes not only physical industrial labour obsolete, but also starts to replace cognitive labour, could be seen as a possibility to work less for the same wages, or to make work as we know it a thing of the past entirely.”

Monument to Work is produced by the Public Art Agency Sweden and is presented in Stockholm in collaboration with MDT.

In preparation for a psychodrama