Associations active in Jordbro’s Cultural Centre want to open up the house to the square outside. In dialogue with the Muf architecture/art and local artists several public artworks have been produced and a festival has been inaugurated that brings the cultural activities of the house outside to the public square.

Jordbro’s cultural center will be demolished. When Art Is Happening started, this hadn’t been decided yet and the threat of demolition led to immense frustration for the organizations using the building. At the same time, the municipality promised to build a new cultural center. The question remains: will there be enough space for everyone in the new place? Will they be able to afford it? The strategy was to use art to show the politicians that what they promised them already existed: a cultural center right under their noses.

The local group and the British art and architecture collective muf architecture/art decided to make the cultural center more visible through temporary installations and a local festival in which some of the organizations active in the center were moved outside into the public eye. The festival, in the form of a month’s programming, took place in the fall of 2017, and the installations were built by the local associations, with the exception of a large nose, a light sculpture produced by muf architecture/art. The nose was mounted on a lamppost in front of the cultural center, which has not been illuminated for years, and whose owner is still unknown despite repeated inquiries. The nose symbolizes what is “right under our noses” — what we don’t see because we are too busy looking for something new. The nose also came to symbolize the fact that a long-term process of change is in progress.

In their application to Art Is Happening, the local stakeholders expressed their wish to work with processes which provide time and resources for networking on the ground in order to mobilize local participation in the project. The first expression for this was a self-initiated workshop in which local participants and Wojciech Pindur, an artist active in the center, built the sculpture Alondra in the shape of a wood grouse on the cultural center’s roof. This fighting bird, which also happens to be the symbol of the municipality, watched over the center and illuminated its entrance. In parallel, a collaboration was initiated with muf architecture/art, a central actor within feminist architecture with many years of experience in collaborating with grassroots initiatives, from small performances to large urban transformation projects. The collaboration between the artist and the cultural center continued after the festival. When muf architecture/art was asked to exhibit the project at ArkDes’s exhibition Public Luxury in 2018, they invited the associations in the center to contribute to it and work with muf architecture/ art around these contributions.

Jordbro is located some 20 kilometres south of central Stockholm in the Municipality of Haninge. Jordbro’s Cultural Centre is a meeting place, comprising everything from environmental workshops to recording studios – all in all some 20 activities are gathered under one roof. However, the cultural centre is located in premises with a closed architecture; it is hard to see what’s going on in the building. Jordbro’s multi-dwelling units were built from the 1950s to the 1970s.

The Jordbro Cultural Centre was founded in 2011. The applicant, Jordbro World Orchestra, acts as a platform for a group of professional producers, musicians, dancers and performing artists. Several associations support the application and are participating in the discussions with the Public Art Agency Sweden.

Muf: How to make visible the everydayness

Muf architecture/art was invited to Jordbro because of their knowledge in working with small grassroot projects and large urban transformation.

What made you want to participate in Art Is Happening Jordbro?

— Just like Sweden we in London use the term densification, and what it means is building a whole lot of housing in existing places. From my work in London I am well aware of the potential loss of value from that process, and one of my selfish reasons was the opportunity to look at London by working in Sweden. And also the freedom of working with a project without any preconception of what the final product would be, sais Muf architecture/arts Liza Fior.

What has been the biggest challenge?

— Like all arranged marriages we had to spend a little time together to understand what Muf could bring to the situation. And perhaps the greatest challenge was to find a way for the culture house who are so busy just surviving, to see what they do and how valuable that is.

What is the artwork about?

— It is about making visible what you are doing every day, to make visible that the new culture house is here in plain sight, right in front of your nose. And what I brought to the situation was the nag, and we offered to bring a nose, an illuminated nose, to substitute for the broken lamppost who hasn’t worked for many years.

Watch the film on Jordbro kulturhus 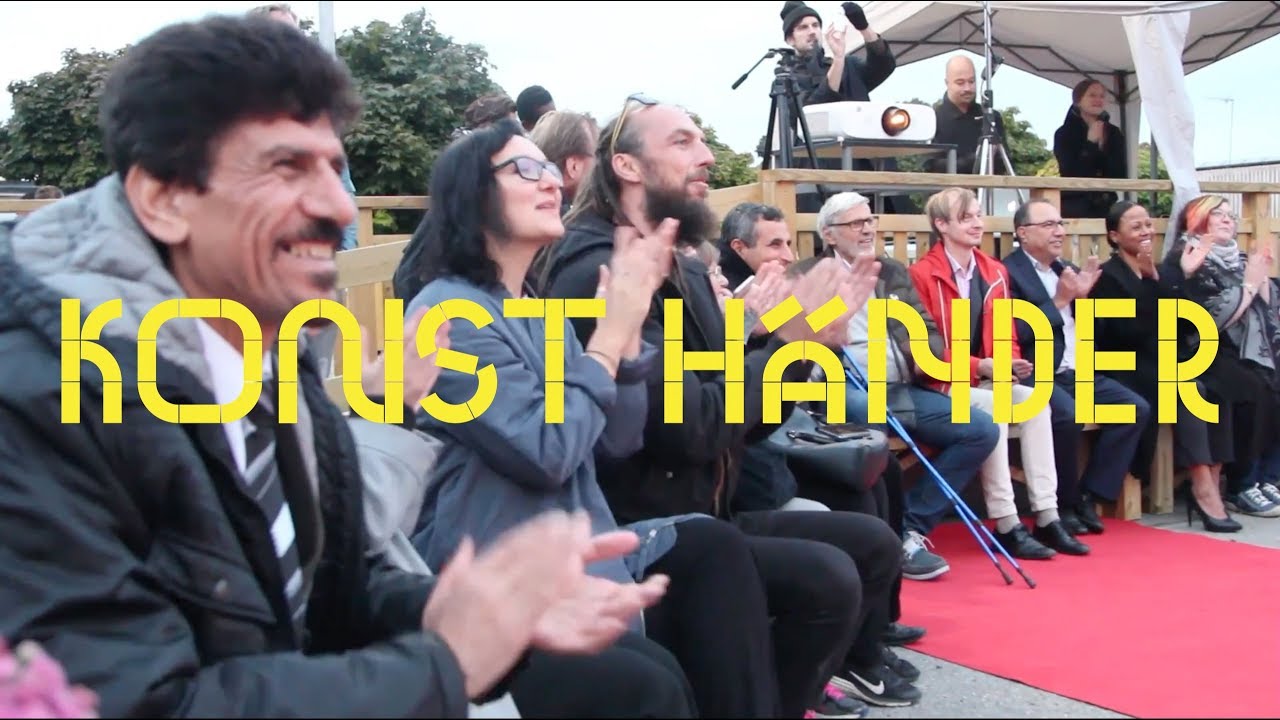 Nine massive, winding ribbons, apparently weightless, rising towards the light that is sifted through their decorative perforations. An...

A joyful troop of perfection, with crying sensitive hearts

In his work, Christian Pontus Andersson wields the key to a parallel universe inhabited by trim male elves....

At Välkommaskolan in Malmberget, art is linked to a local landscape and a land rupturing as a consequence...