De som sår (Those Who Sow)

Whose voices are not heard or easily forgotten when cities change? With the art work De som sår, Saga Gärde, Athena Farrokhzad, and David Gülich draw attention to existing narratives and grassroots initiatives in Amiralsstaden—a neighborhood that doesn’t exist yet, but will be built via densification along the street Amiralsgatan in Malmö.

The sound piece De som sår has its starting point in the community gardens next to the train tracks in southern Rosengård, where an elderly woman by the name of Ćamila spends her days. Ćamila’s stories of cultivation, displacement, and growing roots are interwoven with Athena Farrokhzad’s poetry and David Gülich’s soundscape.

The choice to base their work on Navet’s allotment gardens and Ćamila’s story was guided by the social function that this space has for people in the area. Saga Gärde, Athena Farrokhzad, and David Gülich have worked together before, for example creating radio plays based on Athena Farrokhzad’s poetic and dramatic texts. All three have been based in Malmö for a long time, and Saga Gärde had her studio on Norra Grängesberg Street, in the middle of the future development area. De som sår weaves documentary voices, newly written poetry, and music into a site-specific radio play.

In times like these when many urban development processes are governed by grand visions and aggressive exploitation, this story of soil, flight, and laying down roots is a reminder of the life conditions of humans and the entire planet. Ćamila’s voice is like a sound piece in itself, while Athena’s verses succeed in clothing a political issue in cultivation.

The piece is based on an application submitted by the Urban Planning Office of Malmö to Art Is Happening, in which the city expressed its desire to develop methods to involve the inhabitants in the processes behind the creation of Amiralsstaden, one of the City of Malmö’s largest urban development projects. The area that is to become Amiralsstaden today consists mainly of small industries, associations, and local organizations. The collaboration between the City of Malmö and the Public Art Agency aimed to give current citizens and business owners a voice ahead of the changes. The work was installed in Rosengårds Centrum, outside the public library, during six months 2020/2021. 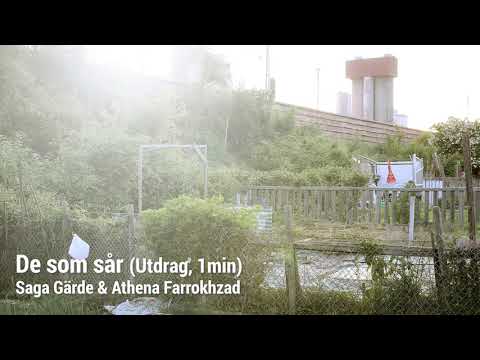 Kabul Time is a street clock of standard Danish design installed outside Triangeln station. But instead of showing...

Through the use of AR technique, the Visborg fields is enriched with imaginary, unknown species.

A large rock, a birch burl and an old wooden boat that speak Sami have entered the Giella...