Kepsen (The Cap) and In Purple

In Råslätt, in Jönköping, artist Johanna Billing has created the video piece In Purple and art and architecture group MYCKET have designed the physical outdoor dance space called Kepsen (The Cap).

Mix Dancers Academy is a dance company and school run by local youths in Råslätt, just south of central Jönköping, the county seat. Mix Dancers started as a reaction to a lack of leisure activities for girls in the area, and has grown into an important organization. At the moment their premises are in the basement of Stadsgården, Råslätt’s recreation center. A central theme in the process of working with them has been their longing for a more public independent space for Mix Dancers: a place where their work can be seen and resonate. The artist Johanna Billing has also collaborated with the group in creating the video piece In Purple. The art and architecture group MYCKET has since joined Mix Dancers in designing the physical outdoor dance space Kepsen, outside the basement’s walls.

MYCKET collaborated with Mix Dancers, the public housing property owner Vätterhem, and the local recreation center. By developing a physical outdoor dance space, they wanted to support and provide space for the existing yet not always visible dance activities in the area. The dance space Kepsen is specifically adapted to dancing but also makes space for other fitness activities, hanging out with family, and barbeques. In MYCKET’s work, the processes behind the design and building are as important as the what is actually built in the end. In Råslätt, several of Mix Dancers’ members have played a pivotal part in the development of the proposal, through the full-scale test on site in the form of dance, building, and painting workshops, as well as through their participation in the actual drafting process. An important element that was part of Mix Dancers’ proposal from the beginning was a reference to R&B aesthetics. The collaboration in Råslätt developed slowly, allowing time to engage several local stakeholders. MYCKET has repeatedly presented the proposal’s development at rallies, and the project has grown into a hub for a more extensive collaboration with local actors. The work on the dance space that was built during spring of 2020, is currently being used as inspiration for the municipal neighborhood development projects.

The artist Johanna Billing and Mix Dancers collaborated on the making of a film that symbolically captures the generational shift that is currently occurring in the group, where a number of younger girls will take over the responsibility of running the organization from the founders who are young adults now. Johanna Billing could identify with the experiences and issues facing Mix Dancers. Together they created a choreographed event, which moved through the neighborhood with music, dance, movement, and sculptural elements. The event was documented and has been kept for posterity in the form of three surviving traces: the art film, a film for Mix Dancers’ YouTube channel, and objects from the event that have been included in the municipality’s collection of public art.

In a choreographed parade, the group moves slowly through the residential area carrying heavy sheets of purple glass. The area’s sounds of lawnmowers, birds, and street maintenance follows them. They move slowly—the slightest mistake and could make them break the glass. The surrounding concrete façades in pink, green, and purple, by the artists Jon Pärson and Lennart Joanson, are mirrored in the purple glass. The façade paintings whose purpose was to humanize the brutalist architecture when they were added in the 1980s, are now captured in the movements of the parade. The music for Mix Dancers’ choreography was produced in collaboration with the musician and producer Neva Deelay.

The film project was the result of a long collaborative process between the group and the artist. Together they explored the color purple and the glass as a symbolic material to emphasize the vulnerability and invisibility that the dance troupe has in the area and the importance of handing over the platform that they have created to a younger generation. The physical act of handing over the sheets of glass and the weight that the group carries on its shoulders, embodies the responsibility and unpaid work that a commitment such as this requires. 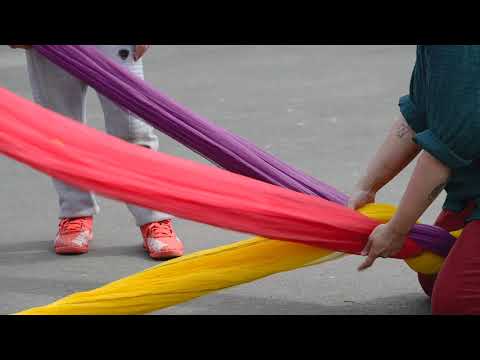 A hole is dug in the ground next to Välkommaskolan and the soil is brought inside the building....

A mockingly provocative small monument to memory has landed in the Umeå winter darkness. It sticks up in...