Gravitational Ripples is inspired by a cosmic phenomenon know as gravitational waves, predicted by Einstein as early as in 1916, but first measured by scientists in 2016. Gravitational waves arise when two celestial bodies orbit each other, spinning closer and closer together, unleashing energy so powerful that it creates ripples in spacetime itself. The memorial conveys this all-encompassing, pulsating movement of the universe. It is a meditation on the boundless forces of the universe, a reminder of the cosmic disruptions that bind and unite us.

When I decided to enter a proposal for the Swedish 2004 Indian Ocean Tsunami Memorial, I knew that I wanted to approach it in the spirit of working-with, a process that led me far out into cosmos from the very beginning.

On December 26, 2004, Southeast Asia suffered one of the most devastating natural disasters in modern times. A quarter of a million people lost their lives following a tsunami in the Indian Ocean. 543 were Swedish citizens. In connection with the 10 year anniversary of the tsunami, the Swedish government decided to create a memorial. In 2017, the artist Lea Porsager won the international competition with her earthwork Gravitational Ripples.

As an earthwork Gravitational Ripples is subject to the ebbs and flows of time. Following the changing seasons, it will always be in flux, always in a state of transition.

Gravitational Ripples was created by the artist Lea Porsager together with Søren Assenholt, Synnøve B. Brøgger and Rasmus Strange Thue Tobiasen.

Lea Porsager on the artistic process of Gravitational Ripples

Lea Porsager won the competition to create a Memorial for the 2004 tsunami in Djurgården in Stockholm. Here she presents her artistic intentions and artist’s notes on the process leading to the land artwork Gravitational Ripples.

“When I decided to enter a proposal for the Swedish 2004 Indian Ocean Tsunami Memorial, I knew that I wanted to approach it in the spirit of working-with, a process that led me far out into cosmos from the very beginning.

As I was undertaking research for my proposal, the news of gravitational waves having been detected by a team of scientists at LIGO (Laser Interferometer Gravitational-Wave Observatory) trickled into every news cycle, and I couldn’t get the scientific illustrations out of my mind. Gravitational waves are ripples in the curvature of space-time itself following a collision between two massive celestial bodies. The image of two black holes merging felt like an apparition—imagine an event so powerful that it alters space-time itself. Those who have lived through trauma might be familiar with how one’s experience of time changes. How memories seem to bend time and space, dissolving the borders between here and there, then and now, past, present, and future.

The 2004 tsunami was a brutal reminder of the fragility of our earthbound existence. Situating our experiences in the greater context of the cosmos connects us to notions of infinity, origin, and creation. The scientific illustrations of gravitational waves reminded me of the unconditional beauty and rawness of nature. How, in a frozen moment, the waves formed a double spiral, resounding with the interconnectedness and complementarity of all phenomena. Somehow, our lives unfold within these strange space-time entanglements. To me, interconnectedness and complementarity constitute a working method in and of themselves. A gravitational wave situated on a quiet spot outside of Stockholm—a cosmic ripple transformed into an earthly, spiralling cradle.

The proposal for Gravitational Ripples was developed together with a small team of three friends-collaborators-thinkers-makers: Søren Assenholt, Rasmus Strange Thue Tobiasen, and Synnøve B. Brøgger. It was important for me that we developed a concept that was secure enough that it could be flexible. And in our team, we continuously reminded ourselves and each other to listen to the material and build from there. I could not imagine a better team—team dynamics mean a lot in the process of working-with, where entanglements themselves are methodological tools. This also goes for my collaborations with the National Property Board of Sweden, Public Art Agency Sweden, architecture firm Nivå, and Royal Djurgården Administration. Conversations with Maria Stigsson and Josefin Fredriksson, who represented the relatives and survivors on the jury played a profound role. Their power and willingness to share memories, visions and viewpoints were integral to the work and its unfolding.
Materializing this work has been a dense and amazing process. To see it grow, to feel its weight, and to see all the different experts at work, both from my own team and from the state agencies. It is also very exciting to see what challenges arise in a process like this, but I have always felt that the project was in good and caring hands. Gravitational Ripples aims to be continually working-with the aftermath of the 2004 event—those touched by the tsunami, their relatives and loved ones—and with nature itself as it unfolds as matter weaving through time.

Working Together with Nature and Not against It: Protecting What Is and Still Adding Something

At this point, our (Western) denial of our dependence on the so-called natural world has become almost impossible to maintain. The deep-rooted Cartesian dualisms that are the companion thought-forms to human exceptionalism and advanced capitalism are being profoundly challenged. We experience—and will continue to experience—the devastating effects of climate change and mass extinctions. These times call for creativity, radical thinking, passion and sober ways of connecting. To loosely quote biologist and theorist Donna Haraway, we are players within a colorful, lively compost pile. We become-with each other or not at all. Again, it’s all about working- and thinking-with. In Gravitational Ripples, the primary use of soil is a very concrete way of working with earthly matter and matters. As we repositioned the double spiral to include the parking lot, we added biodiversity. We planted and sowed flowers and meadow grass. Diversity is not only pleasant to human senses, it nurtures other critters as well—bees, spiders, butterflies, you name it. Meanwhile, the old trees at Djurgården remain untouched, though in new and fresh company.

I am sure Gravitational Ripples will grow into its own being. Working-with time is to see things grow, to allow nature space to express itself. This is an ongoing process, as new layers and seeds will be added each year, like the crystals in Robert Smithson’s Spiral Jetty (1970). I have been asked if I am inspired by Smithson’s work, and yes, for sure, it has had an impact on me. I walked the Salt Lake spiral in 2006 and it was a profound experience. To me, earthworks differ from other art experiences in that they are unapologetically physical encounters. Most of the earthworks I’ve seen have been located in the United States, made by male artists in remote areas. But what I took from experiencing a work like Lightning Field (1977) by Walter De Maria was this sense of immersion. Being permeated by its atmospheres, its scents, etc. An all-encompassing experience that opens and expands ways of sensing, being and thinking-with the world. My hope is that this memorial can serve as a gentle reminder of the mysterious nature of our existence. And how we—together and in solitude—might find solace in the boundlessness of the universe. The strange and deep forces that bind and unite us.

In December 2017, the team behind the detection of gravitational waves—Rainer Weiss, Kip S. Thorne, and Barry C. Barish—received the Nobel Prize in Physics in Stockholm. After the ceremony they visited the site of Gravitational Ripples. Weiss wrote the following about the memorial:

“The sculpture reminds us of two dramatic events in nature. Both are the result of the release of an enormous amount of energy. One is the wave that came from one of the largest earthquakes known, the other, the waves that came from a quake in the structure of space itself. The first generated a tsunami with heights as large as 30 meters. The other came from the collision of two black holes each weighing about 30 times the mass of our sun. The first occurred on Dec 26, 2004 near Indonesia. The other about a billion years ago in a galaxy a billion light years away which was detected as a slight tremor no larger than 1/1000 the size of an atomic nucleus by the Laser Interferometer Gravitational-wave Observatory on September 14, 2015. The detection of these waves are a confirmation of Albert Einstein’s theory of general relativity and an example of our ability to use technology to learn about nature. By coupling these two events the sculpture embodies both our fragility as well as our curiosity of the universe we live in.” 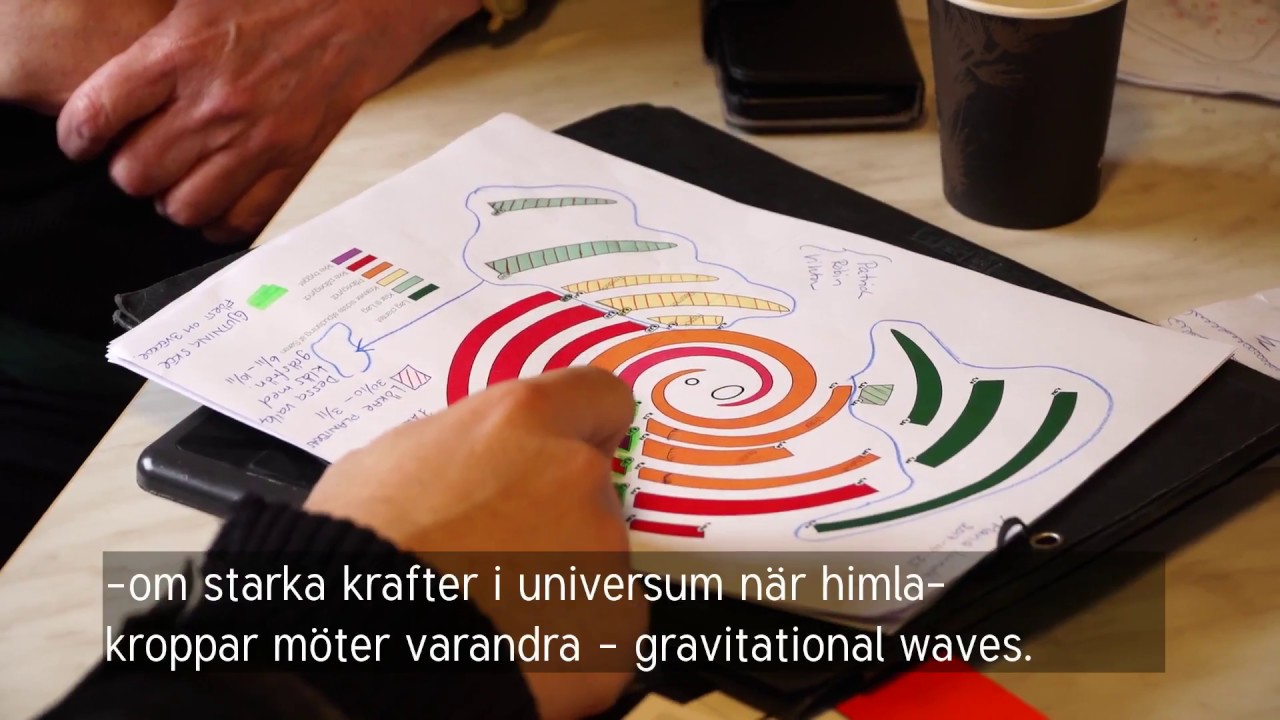 Rainbow Snake by Huang Yong Ping is the proposal that won the artistic competition to intervene in the...