Sophie Tottie’s oeuvre is characterised by a strong sense of how space, materiality and body movements interact in the experience of a work. For the Ull building on the Swedish University of Agricultural Sciences campus in Ultuna, the artist has created a drawing consisting of hundreds of reflective brass dots moulded into a terrazzo floor.

The longing for knowledge and understanding are the cornerstones of a university body. Like a poetic reminder of the multifaceted nature of knowing, the floor drawing associates to the French philosopher Michel Serre’s image of a twinkling starry sky as a metaphor for knowledge, rather than a brightly shining sun. Alone or in clusters, an unfathomable number of glimmering points form navigational coordinates instead of the supremely solitary celestial body of the sun.

The arrangement of the brass circles in rectangles and squares is based on the trusses of the pantheistic Pantheon temple. The light flowing in through the opening in the Pantheon’s dome corresponds to the oval brass object that complements the floor design. The design and location of the object challenges the 90-degree angularity of the room and warps our spatial perception of the atrium, with its ceiling height of twelve metres. At certain angles, the object appears to be a hovering slice of materialised light in a frozen moment just before impacting with the floor.

Moving in and around the work, P.Ull reveals its many different facets to the viewer. Its position in the twelve-metre high cubical room in the middle of the building means that we can see the floor surface from six different levels. Brass was chosen on account of the soft and malleable way it reflects light. Body movements influence the experience of the work, since the angle of the light changes depending on where we stand. In this way, P.Ull radiates with our movement through the room, only to recede and apparently disappear out of the viewer’s sight, in a play between visibility and invisibility, between appearing and disappearing. Although materially permanent, the work changes appearance, not only with the viewer’s movements in the room but also with the earth’s rotation, which affects how the sunlight falls and is reflected. This poetic invocation of the tangible presence of an image alongside its transience lies at the very heart of Tottie’s oeuvre and relates to the fundamental preconditions of existence and knowledge. 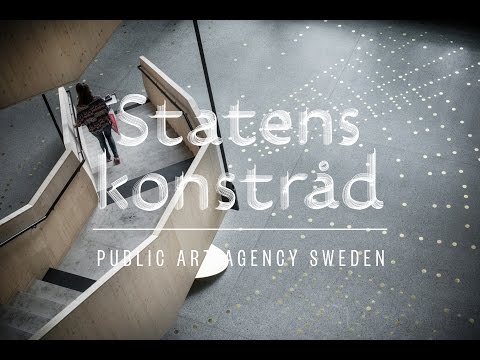