One thousand six hundred LEDs are flashing Selander’s work, chapter by chapter, from sunset to sunrise on the façade of the MAX IV Laboratory at Lund University. A both abstract and figurative narrative of the early days of film is built up through episodes from the history of light, perception and the moving image. Clips from classic films such as Fritz Lang’s Metropolis, Eadweard Muybridge’s photo series and many more are mixed with various light phenomena such as lightning, fireworks and bioluminescent sea creatures.

Lina Selander’s more than nine hours long work appears on a surface measuring 15 metres high and 9 metres wide. The theme and bright design of Mehr Licht!are directly related to the activities taking place in the new MAX IV complex. The laboratory houses the world’s most powerful source of synchrotron light, which is used to investigate the structure, properties and functions of molecules and materials. 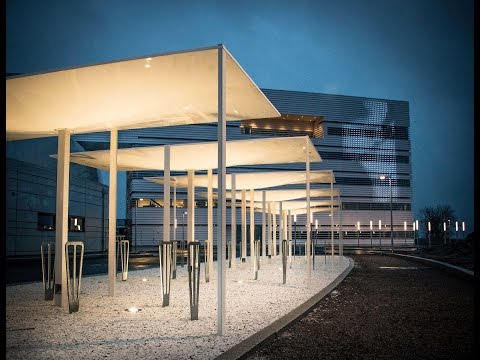