House of Words (HoW) consists of two parts: an architectural structure, designed by architect Santiago Cirugeda and his studio, Recetas Urbanas, and built through a collective process with more than 70 participants – and a collective experience activated by Loulou Cherinet, aiming for individuals and communities to appropriate this platform and engage in storytelling.

For the design of HoW Cirugeda travelled from Seville to Gothenburg to view the site, to get to know the city and various citizens’ initiatives, and to meet with other groups exploring new approaches to architecture. The resulting proposal consisted of a “prosthesis pavilion” that is attached to Röda Sten Konsthall, built with materials from previous projects of Recetas Urbanas and a municipal recycling station. The philosophy of the process is a self-building method based on learning by sharing, teamwork and community. More than 70 people from all walks of life took part in this process during four weeks, exchanging skills, discussing the design and purposes of the building, and helping each other along the way.

Loulou Cherinet, on the other hand, departs from her ongoing focus on speech acts and the performativity of language and, more specifically, on how words challenge us and transform the world. Relating to the topic of the Biennial, history as an open work, she designed a format, a sort of ritual for conversation open to everyone who wishes to apply it and appropriate the space of HoW.

The format is simple: a roundtable session where one shares a meal and tells a story. In each session everyone has a given role: there are Storytellers, a Hostess or Host, a Camera and, occasionally, an Audience. The Storytellers are specially invited guests who are asked to contribute a story about a specific life experience. The Hostess or Host cooks and takes care of the Storytellers. The Camera, rotating slowly, records the scene as the dinner goes along. The Audience infuses power to the situation, and after a while joins the conversation. All roundtable conversations will be filmed and displayed in HoW, and will be made available to a larger audience via youtube and vimeo and on GIBCA’s website. A selection of the material will be published on the website and in the social media channels of Public Art Agency Sweden.

The repetition of the format is vital to creating a ritual and institution. It also aims at generating a sense of community and shared experience, leading to a collective process of thinking and the articulation of difference in relation to as many viewpoints and stories as the number of participants around the HoW’stable.

Cherinet herself hosts a number of roundtable sessions. Her focus is on the multiple ways in which the notion of “utanförskap” (outsider-ship) has been used as a speech act in the last ten years. Oganisations, artists, and the Biennial’s team are a few of the other users of HoW, all in dialogue with the artist and the format itself. Visitors and random passersby are also invited to participate, organise and film their own roundtable sessions.

HoW also hosts the work … a 100 stools by artist Serge Alain Nitekega, in which audience and storytellers will be sitting. Nitegeka conceived this project in response to his experience as asylum seeker during the waiting hours at the Refugee Reception Center in Pretoria, South Africa, in 2011. … a 100 stools was the artist’s attempt to restore a sense of self-dignity, invite local authorities to a dialogue with the newcomers, and offer hospitality to the migrants. In HoW a 100 stools recovers its original aim partly, providing the context for a dialogue between people of all walks of life and local authorities.

House of Words serves as a meeting point, a place to explore the intimacy of the small group or exposure to the public – a place where we can join in a community, meet with others, share a meal, and leave a story within a story. It is also an unusual architectural structure to be temporarily inhabited, and an exhibition space where we can take our time to peruse and enjoy the many stories that others have left behind.

House of Words is an architectural and process-based artwork by architect Santiago Cirugeda and artist Loulou Cherinet. It was inspired by the traditional meeting places – sheds or shaded spaces – found in many African societies, used by communities for dialogue and exchange.

House of Words (HoW) was commissioned for GIBCA 2015, and organised and produced by the Public Art Agency Sweden/Statens Konstråd, in collaboration with the Gothenburg International Biennial for Contemporary Art (GIBCA).

Curated by Elvira Dyangani Ose, curator of the Gothenburg International Biennial for Contemporary Art 2015, in association with Edi Muka, curator at the Public Art Agency Sweden. 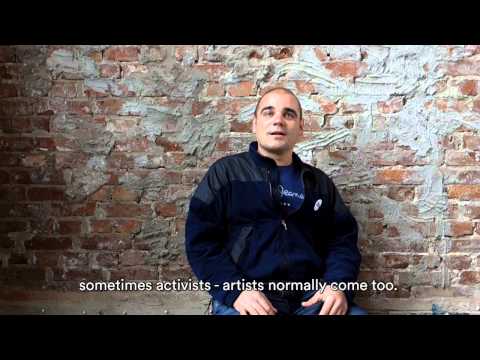